Aussie pubs are iconic and unique. From outback pubs to heritage listed pubs, it is worth taking time out to visit some of these well-known drinking establishments. Many are decorated in a typical Aussie fashion, with memorabilia from days gone by. Others will show their English influence from the days when convicts were transported to Australia from the Mother Country. Each Australian pub has its own distinctive characteristics and you can wander around at leisure and take in what is an exceptional piece of Australian history.

Immortalised in song in 1957 by the legendary true blue Australian singer Slim Dusty, the Pub With No Beer is located near Macksville. Here you will be greeted like a long lost mate. You can also stay here in bunk beds or private rooms and camping facilities are also available. This is a great place to prop yourself up at the bar, sip a coldie and chat to the friendly locals and travellers. 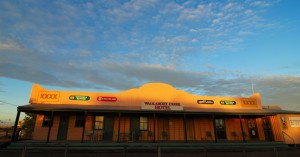 Built in 1900 and once known as the Federal McKinlay Hotel, this pub had a name change after Mick ‘Crocodile’ Dundee made it his regular drinking spot. It then became known as the Walkabout Creek Hotel and can be found in McKinlay in outback Queensland. Adorning its walls are water buffalo horns and other relics from the outback.

Situated in the beautiful The Rocks area of Sydney since 1913, this pub has not changed much over the years. It was a favourite drinking spot for soldiers during the First World War in 1918 and is a good example of well-preserved Edwardian architecture. It is heritage listed under the National Trust of Australia. It is a great place to try a bed & breakfast package where the rooms are decorated in a quaint antique style theme.

Situated on the banks of the Hawkesbury River, this pub is accessible from Sydney by train or car. This is Australia’s oldest mainland pub and is located in Windsor. It began life in 1815 as an inn for tired travellers. It was built by convict labourers and many visitors believe the ghosts of the convicts still remain in the deep dark cellar area.

You will spend a long time here just gazing at the memorabilia crammed into every available space. Built in 1930, this pub was used as a rest stop by weary drovers. It then became a stopover for pilots of the new Qantas airline in 1934. Today, those travelling the Explorer’s Way between Darwin and Alice Springs, make this a regular place to stop.

There are many places to drink worldwide, but Australian pubs are irreplaceable. Each pub is a one-off and steeped in history. Outback pubs are different to city pubs, mainly in their style of décor. Outback pubs pay homage to the hardworking drovers and property owners who ran many thousands of head of cattle or sheep. Flight Centre Australia can put together a package where you can visit some of Australia’s oldest pubs. Here you will find friendly locals willing to spin you a yarn and have a drink with you. Be prepared to spend longer at these friendly pubs than you thought you would!

More Reasons to Come to Europe in Winter